After 3 trips to the US, It was time to go back to Southern Africa !

I (Nivek) fell in love with Southern Africa in 2011, travelling for the first time to South Africa. I’ve been then to the most part of the area countries – South Africa, Lesotho, Swaziland, Namibia, Botswana – on three different trips.

But still so much to discover, and I wanted to share this experience with Manu. So idea was to introduce her to African way of life, wildness, wilderness and…. adventure ! And on my side discover new parts of already mentioned countries.

I knew that for her it would have been a bit tough for a first trip, I hoped I wasn’t too rusty to be some kind of good “guide”. We weren’t disapointed during out trip 🙂

This trip was planned and developed around 3 Major attractions, after arriving in Cape Town :

The journey and the vessel

Begin your journey ! Click on the map bellow to get informations about each stage and stop

For this trip we rented a fully equipped Land Cruiser from Britz.

We had to break our piggy-bank to do so. And let’s be as clear as possible. It didn’t worth it at all. 👉 Our review here.

Car was in poor conditions, more than 100 000 km when we got it. And we had subtank transfer issues in the middle of Mabuasehube.

Compared to other vehicles we crossed during the trip, I would recommand to go for another rental company. 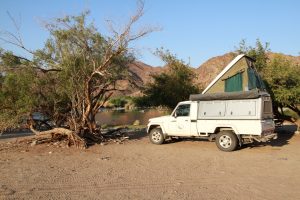 SAN Parks
The most useful and official site to get information about the South African parks (such as maps, activities) and to book park campsites directly online. It’s too easy regarding other Southern Africa Experience !!

Maun Self Drive 4×4
Booking a campsite in a park in Botswana, can look like a nightmare sometimes. That website for us is the referentiel of what have been privatised or not to understand if we must go through DWNP or private companies.

Tracks4Africa
You won’t find better maps than Tracks4Africa. At least, this is our point of vue ! More about this nice community innitiative here.

Tracks4Africa
Regarding GPS Maps… them again… well, they sell maps on all supports !! More about interest of having a GPS for an African trip here.

As far as guides, for this trip we used some of the ones Kevin already had. Regarding our guide selection for Southern Africa, your can find more here.

girardinPHOTO
French photographs who travelled across the Botswana and Kalahari in 2016.

🇧🇼 RBOF
Not sure about nationality but couple living in Botswana and who went to Khutse in 2018.